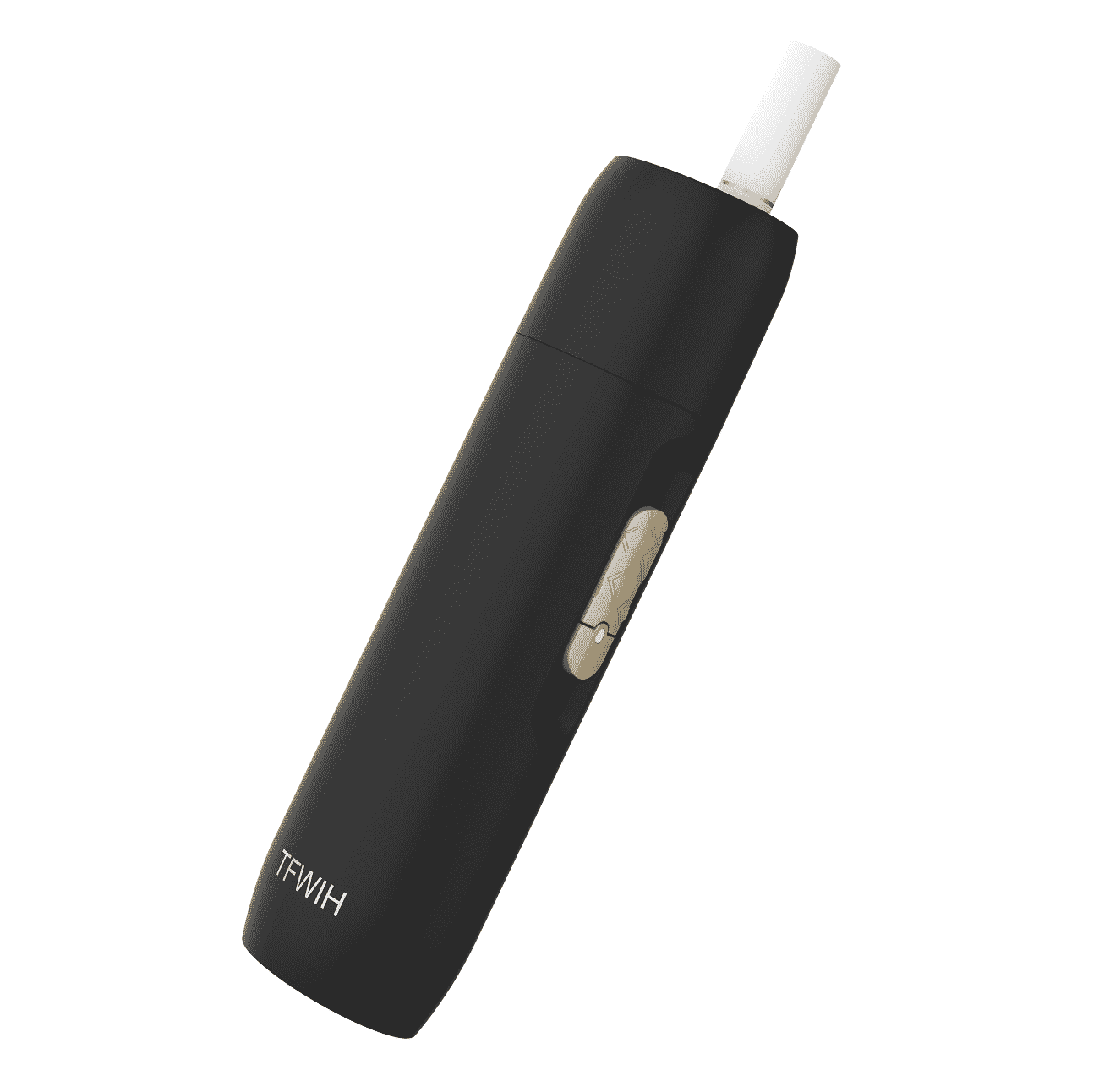 Devices are coming in thick and fast for reviews at the moment, and right on the back of Fergus’s excellent review of the Sempo P1 we have another heat not burn device to review, the TFWIH.

Now when I first saw the name TFWIH I thought it was just random but actually I was wrong, it actually means “the first wealth is health.” I personally have never heard of this saying, could it be a Chinese proverb?

If you have heard of it please let us know in the comments.

Anyway it arrived rather promptly via DHL from China, so on to our review.

The TFWIH arrived in a sturdy white box and at the bottom it says “The First Wealth Is Health” which is obviously what TFWIH stands for. The box did look a bit battered but I am fairly confident that in a retail environment the box would arrive in pristine condition.

One thing that we are noticing certainly with our more recent reviews is that almost all Chinese manufacturers are opting for the “all-in-one” system as opposed to the holder with separate charging unit like the iQOS. Although to be fair to IQOS they will soon be selling both which is great thinking on their behalf, covering both bases.

Our device was black and it feels very nice in the hand. It is reasonably light considering it contains a 3000mAh built in battery.

It uses a spike system (as opposed to a blade or external heating) and as with almost all these heat not burn devices coming out of China it utilizes HEETS.

What’s in the box?

Just the usual which is a plastic tray for the TFWIH to sit in, a standard USB charging cable, some cleaning sticks and certain paraphernalia including a user guide. We don’t need to go into too much detail because all of these heat not burn devices usually come with exactly the same contents.

The device itself is quite large, but that is because it incorporates a mammoth 3000mAh battery that is good for around 30 HEETS between charges. This is the largest battery in any device that we have reviewed by quite some distance. The device feels good in-the-hand and is quite light all things considered.

Another excellent feature of the device is that there are only two buttons on it, one button (the smaller one) switches the device on or off and the other larger second button ejects the top of the unit so that you can remove the whole of the top of the device. This is superb because this makes cleaning the heating spike an absolute breeze! With some devices not so easy to clean this one is the best we have seen so far for access to the heating chamber. Also when you slide the top bit back into the main unit it is magnetic so it closes with a very satisfying click. I know we shouldn’t really get excited about something as trivial as that but the truth is we can’t help ourselves.

To switch the TFWIH on you simply hold the smaller half of the button down for a second, a green light will come on and it will then vibrate once, this signifies that the heating spike is warming up. Whilst this is happening the green light is pulsing. Roughly 20 seconds later the green light becomes solid and it will vibrate twice very quickly to let you know it is ready to vape. I was getting around ten to fourteen puffs per HEET, which is pretty much par for the course. When you are reaching the end of the HEET you will get another vibration and that gives you time to get a couple more puffs in before the unit switches off. Again this is common practice with these devices.

How does it vape?

It vapes really well. Myself and our chief reviewer and main man Fergus disagree on which heating element is best, he prefers the blade and I prefer the spike. To be completely honest there isn’t a great deal of difference between the two and I am almost thinking that Fergus is right and a blade might be slightly more effective. This device performs exactly as it should do so it gets full marks from me.

All in all this device is very good, it is on a par with other recent Chinese devices that we have been sent for review. Considering some of our earlier reviews of Chinese devices highlighted major issues such as the device heating the blade up to a temperature high enough to actually start burning the tobacco(!) I think they have now firmly mastered the art of getting the temperature right. Of course getting the heating elements temperature correct is a fundamental requirement but that wasn’t the case in the early days where it seemed to me that they were in such a rush to bring their devices to market they didn’t really concentrate on getting everything fully tested.

For more information on this device and to purchase this device please feel free to check out the following website.